a) Various Densities in Axial Brain CT
The normal anatomy of brain is relatively easier to understand with CT than MRI, comparing to radiograph, it can better delineate different soft tissue density
– Structures appearing “white” in an unenhanced CT brain can only be the following high density structures :
1. Bone e.g. cranium ( calcium-containing )
2. Blood in acute bleeding ( later will become isodense and hypodense with time )
3. Metallic foreign bodies

Similar to any other axial CT of the body, left side of the image is in fact the right side of the patient’s body. Whenever learning the basics of interpretation of any imaging, it is always beneficial to integrate what you have already learnt in gross anatomy in pre-clinical years, especially cross-sectional imaging like CT and MRI. Some relevant disease conditions are also included briefly later.

The most commonly encountered brain CT is axial brain CT.
Noted that the cross-sections are not really horizontally oriented but in fact, slightly tilted. This allows sparing the orbit from exposing to radiation. The figure shows a scout view with various parallel lines representing different level of slices.

The most fundamental interpretation technique is to look at the symmetry on both sides. However, a complete interpretation of CT brain has also to assess for bone, blood, brain parenchyma, ventricles and cisterns.
Try to interpret only one component each time by going through vertically across all slices, then repeat again with another components.

c) Level at the Sella Turcica

It is typical to see a white “X” at the center in this level which is composed of the temporal bone.

– The dark spaces in the X bilaterally are the mastoid air cells ( B ) found in temporal bone. In case of mastoiditis, they are no longer dark as the air will be replaced by some purulent materials.

– Spaces behind “X” is, therefore, posterior cranial fossa, you can identify two different structures including :
1. Anteriorly, medulla oblongata ( D ) which eventually becomes spinal cord going through the foramen magnum down below
2. Posteriorly, cerebellum ( E ) which is behind the brainstem.

– Owing to the fact that there is a layer of meninges in between bone and brain parenchyma, therefore, a thin black rim, representing the cerebrospinal fluid (CSF) in subarachnoid space of the meninges, can be seen surrounding the brain parenchyma.

– The one directly anterior to frontal lobe ( F ) are the frontal sinuses ( G ). Similar to mastoid air cells, patients with sinusitis will also see some fluid instead of dark air inside the sinuses involved.

– The outer surfaces are origin of many skeletal muscles, which appear as thin line offset tissue densities right external to the cranium in cross-sectional imaging :
1. The one next to the temporal bone is thus temporalis muscle ( H )
2. Occipitalis muscle ( I ) is right behind the occipital bone ( J )

d) Level at the Suprasellar Cistern

– In the anterior and middle cranial fossa, there are frontal lobes ( C ) and temporal lobes ( D ) respectively. As mentioned previously, a dark rim surrounding the brain parenchyma is the subarachnoid space filled with CSF.

– Basilar artery ( B ) is found inside the CSF of subarachnoid space. It is an important artery as it is part of the supply of the Circle of Willis, which is also found in the subarachnoid space. That is why rupture of those arteries can result in subarachnoid hemorrhage, appearing to be a white rim instead of dark rim around the brain parenchyma.

– Basilar artery is sitting directly in front of pons ( E ) at a sulcus called basilar sulcus.

– The dark space in between pons and cerebellum ( G ) is the 4th ventricle ( F ) in which there are some foramen allowing CSF to travel from ventricle to cistern. In case of medulloblastoma of cerebellum, a midline tumor commonly found at the vermis, it may obstruct the 4th ventricle and thus result in obstructive hydrocephalus.

e) Level at the Basal Cistern

– A “smily face” composed of various dark spaces can be seen in this level :

– The two “eyes” are the frontal horn of the lateral ventricle ( A ) which are normally curved outwards in shape.

– The brain parenchyma beside them are the frontal lobes, which are connected via a communication tract called corpus callosum ( B ) despite separated by falx cerebri ( C ).
Herniation across the falx cerebri may make the “eyes” asymmetrical, this is a good evidence of midline shift in case of space-occupying lesions on one side of cerebral hemisphere.

– The “nose” at the center is the third ventricle ( D ), which is CSF filled space separating the pair of thalamus ( E ).

– The prominent fissure seen behind the frontal lobe would be the lateral fissure ( G ).
– Since the third ventricle and the basal cistern are much smaller CSF-filled spaces comparing to the lateral ventricle, in cases of cerebral edema, they can be completely obliterated leaving on the “eyes” seen. This is why it is dangerous if you cannot find the “smily face” across all the slices.

f) Level at the Internal Capsule

– In contrary to the “smily face”, you can see an “angry face” at the level of internal capsule ( B ).

– The “eyes” with a curved outwards appearance are again the frontal horn of lateral ventricle ( A ).

– The darker V-shaped grey matter seen near the “eyes” would be the internal capsule ( B ) which should have anterior horn, posterior horn and genus ( meaning corner ). it is composed of essential upper motor neuron fibers from the primary motor cortex, which is at the white matter.

– At this level onwards, only the two cerebral hemispheres would be seen and we can see related structures like falx cerebri ( E ) and lateral fissure ( F ).

g) Level at the Body of Lateral Ventricle

– The grey matter beside the lateral ventricle is corona radiata ( B ) which is less condensed upper motor neuron fibers located above the internal capsule.

h) Level above the Lateral Ventricle

– At this level onwards, we cannot see any dark spaces like ventricles anymore because we are at the top part of the cerebral hemisphere. 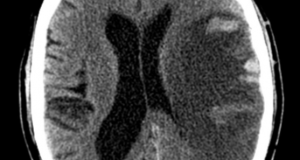 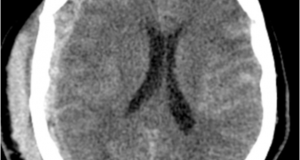 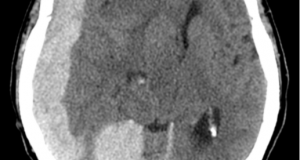