Alzheimer’s disease is the most common cause of dementia and accounts for ~55% of all cases of dementia. One to two percent of the population at age 65 will have dementia and the prevalence increases by 15-25% each decade. The neuro-pathological changes in Alzheimer’s disease are due to two main processes. First of all, there is an abnormal clearance of the protein aggregate amyloid-β (Aβ). A β42 (one of the most common isoforms of Aβ) is highly neurotoxic and clumps to form senile plaques which are subsequently deposited in the cortical gray matter. Aβ42 also deposits in the wall of cortical and leptomeningeal arterioles, resulting in amyloid angiopathy. Secondly, in patients with Alzheimer’s disease, there is abnormal phosphorylation of a microtubule-associated protein named tau (hence Alzheimer’s disease is considered a “tauopathy”). These subsequently result in the formation of neurofibrillary tangles and also neuronal death. 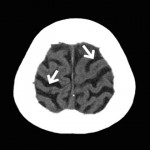 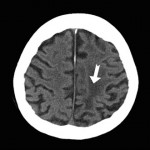 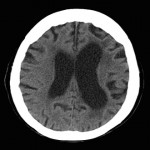 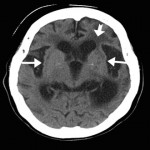 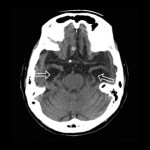 Figures 1-5 are non-contrast CT scans of a patient with severe Alzheimer’s dementia. One can see that there is generalized cortical atrophy as indicated by the generalized widening of sulci

. In particular, the medial temporal lobes are particularly affected

, and there are markedly enlarged temporal horns

(the medial temporal and parietal lobes after often most affected in Alzheimer’s disease). This patient, however, also has features of small vessel disease, as evidenced by periventricular and subcortical white matter disease

. This is common in patients of advanced age, and they often have “mixed dementias” with a combination of Alzheimer’s disease and vascular dementia. 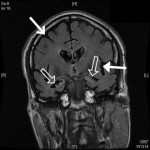 Figure 6 is a non-contrast coronal FLAIR MRI. Again, there is presence of cortical atrophy with widening of the sulci

. However, one feature that can be appreciated using MRI, is the hippocampal and entorhinal cortex atrophy

, which are often disproportionally affected in Alzheimer’s disease. 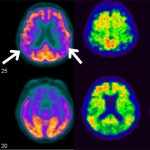 Finally, nuclear medicine such as positron emission tomography (PET) is useful in demonstrating areas of hypometabolism and also amyloid burden. For example, in the left panel of Figure 7 which is a 18F FDG PET, there is markedly reduced metabolism in the bilateral temporo-parietal lobes