Neoplasms of the Central Nervous System

Neoplasms of the central nervous system could be divided into primary and metastatic tumours, each accounting for approximating half of all brain tumours.

Primary neoplasms can be further subdivided into several major categories:

Meningiomas are one of the most common brain tumours, accounting for one quarter to one third of all primary intracranial neoplasms. 90-95% of meningiomas are benign (also called typical meningiomas), whilst only a very small proportion are classified into atypical mengiomas and anaplastic (malignant) meningiomas.

Many meningiomas are found incidentally during imaging and autopsy, and most are asymptomatic. They usually grow very slowly and rarely metastasize. They are well-demarcated lesions that have a broad base of dural attachment. The non-contrast cranial CTs shown here are from 2 elderly patients with meningiomas detected incidentally (Figures 1 to 5 are from patient 1 whilst Figure 6 is from patient 2). In both cases, there is a solitary, small, well-demarcated, round, hyperdense lesion noted which is adherent to the dura, all of which are typical features of meningiomas. In the first case, the meningioma is at the high left parietal lobe

, whilst in the second case, the meningioma is located at the posterior fossa

. As the meningiomas in both cases were small without causing symptoms, both patients were managed conservatively. 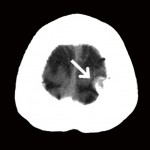 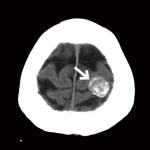 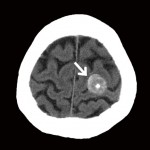 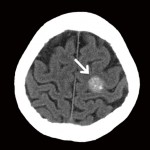 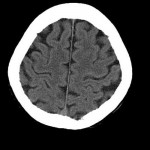 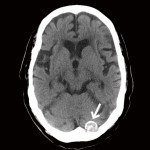 The set of non-contrast cranial CT scans shown here are from a chronic smoker with a history of stage IV adenocarcionoma of the lung presenting with recurrent seizures. The CT scan shows multiple isodense lesions 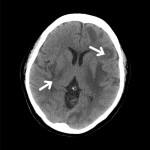 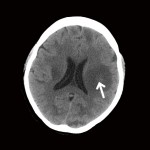