Glaucoma is a neurodegenerative disease characterized by the progressive death of retinal ganglion cells (RGC) and their axons, leading to characteristic optic nerve structural damage and visual field deficits. It is the second leading cause of blindness in developed countries.

Other risk factors include a family history of glaucoma, history of trauma or steroid use and high myopia. Medical conditions that cause a decrease in perfusion may also contribute to glaucoma, such as hypertension, low diastolic pressure, diabetes, obstructive sleep apnoea, migraine, arrhythmia etc. 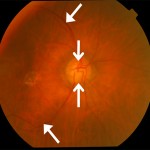 Sharp bending bayonetting vessels may be seen at the rims. There may be nasalization of vessels as the cupping deepens. Disc splinter haemorrhages signal glaucoma activity and progression, and usually precede focal neuro-retinal rim notching. 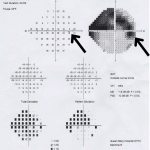 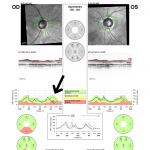 Signs of laser and surgical intervention may be observed by looking closer at the anterior segment.

Use the retro-illumination technique to shine a focused light beam through the lens to look for laser peripheral iridotomies (Figure 4). You may have to lift the upper eyelid to look for evidence of glaucoma filtration surgery (Figures 5 & 6). 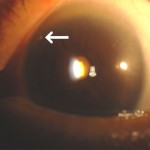 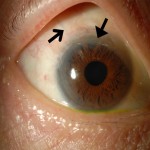 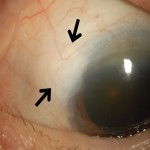