A number of systemic conditions can cause corneal problems.

Rheumatological conditions, in particularly rheumatoid arthritis, can cause a peripheral thinning of the cornea called peripheral ulcerative keratitis. If untreated, this can lead to perforation of the cornea and loss of integrity of the globe. Other examples include systemic lupus erythematosus, Wegener’s granulomatosis and polyarteritis nodosa.

Other autoimmune diseases can also affect the cornea. Steven-Johnson syndrome can cause inflammation of the cornea and conjunctiva in the acute phase, which can result in severe scarring and conjunctivalization in the chronic phase (Figure 1). 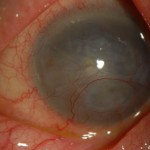 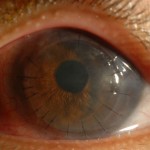 The above photo (Figure 4) is from a patient with corneal transplantation. The cornea is an immune-privileged site for transplantation as it has no blood supply. ABO compatibility is not required for transplant. However, rejection can still occur and therefore patients will need long term topical steroid therapy. However, systemic immunosuppressants is rarely required. 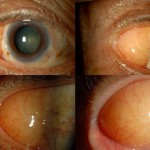 The above photo (Figure 5) is from a patient with prolapsed orbital fat. Although alarming at first glance, this is in fact a rather common, benign condition, which is associated with advanced age. The orbital fat prolapses through the orbital septum and appears as a yellowish mass, most commonly at the supero-temporal region. Vision and extra-ocular eye movements are typically NOT affected. Indication for surgical excision of the prolapsed fat is mainly for cosmetic purposes.