The MRI images shown here (Figures 1 to 5) are from a patient with cerebral amyloid angiopathy (CAA). CAA is caused by the accumulation of aggregated amyloid-β (Aβ) plaques in the walls of small to medium-sized arteries and penetrating arterioles. Such aggregates are due to an imbalance between Aβ production and clearance. Whilst Aβ40 (40 meaning that the Aβ fibril is 40 amino acids in length) are found in CAA, a relatively longer form, Aβ42, is found in neuritic plaques associated with Alzheimer’s disease.

The deposition of Aβ plaques in the brain has 2 major consequences:

In CAA, there is preferential involvement of the supratentorial cortex and leptomeninges. The cerebellum, brainstem and basal ganglia are relatively spared. Thus, in an elderly presenting with a lobar spontaneous parenchymal haemorrhage, CAA needs to be considered as an underlying cause.

The MRI sequence shown here is termed “susceptibility weighted imaging”. This is a very sensitive technique to detect haemorrhage within the brain (up to 35% more sensitive compared to T2* gradient recalled echo imaging in microhaemorrhage detection). In this patient with CAA, multiple punctate “blooming black dots” could be seen in the leptomeninges, cerebral cortex and well as subcortical white matter

. The basal ganglia and cerebellum are relatively spared. These “black dots”, or better known as “micro-bleeds” or “micro-haemorrhages“, are the result of amyloid deposition within the arterioles.

It should be noted that “micro-bleeds” or “micro-haemorrhages” could also detected in the MRIs of patients with chronic hypertension. However, these are often deep-seated, rather than located at the cortices. 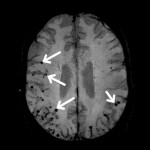 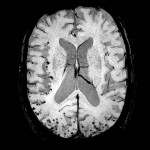 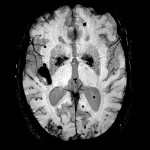 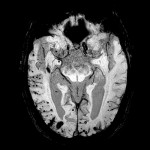 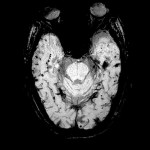