Frontotemporal dementia is the most common cause of dementia in patients under the age of 65. There are three different subtypes: 1) behavioural-variant frontotemporal dementia,the most common subtype which is characterised by changes in personality and social conduct; 2) progressive nonfluent aphasia – a disorder of language output that may occur in the absence of impairment of other cognitive domains, and 3) semantic dementia where patients exhibit behavioural changes and difficulties in language comprehension whilst speech itself remains relatively fluent.

The PET scan of a 60 year old man who presented to the Memory Clinic with a 2 year history of behavioral problems is shown in Figure 1. The patient was noted to be very strict and rigid in the order of things e.g. the order of clothes being dried up after washing and the order of items inside his wallet. He was noted to have disinhibition and would for example, push away other people in his way. He was also found to be more apathetic but had socially inappropriate behaviours, and would laugh suddenly or cry out loud without any reason in the public. Furthermore, he was found to have memory impairment with anomia and prosopagnosia (impaired ability to recognize faces). There were otherwise no focal neurological signs on physical examination. PET brain revealed hypometabolism over the bilateral temporal lobes and medial pre-frontal lobes

. This patient was diagnosed with behavioral variant of frontotemporal dementia. 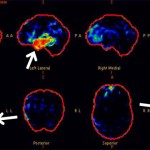