Multi-system atrophy (MSA) is a rare adult-onset sporadic neurodegenerative disorder. There are two main subtypes, as identified by its dominating symptomatology. MSA-P is when parkinsonian symptoms predominate, and MSA-C if cerebellar symptoms dominate. These two terms have replaced the terms striatonigral degeneration and olivopontocerebellar atrophy respectively.

The most common symptoms of MSA include: 1) parkinsonism, 2) autonomic dysfunction, 3) cerebellar ataxia and 4) pyramidal signs. At an early stage, the disorder may be difficult to differentiate from Parkinson disease, however patients with MSA often present with symmetrical parkinsonism without tremor, and have early instability and falls. They also have early prominent autonomic dysfunction (e.g. postural hypotension, incontinence, impotence etc.), which may precede the onset of motor symptoms.

Autonomic function tests (e.g. testing for postural blood pressure drop and testing of cardiovascular reflexes such as heart rate variability) will be useful to establish a diagnosis of MSA. Characteristic neuroimaging features include the ‘hot cross bun sign’ as can be seen in Figure 1

. This is a cruciform hyperintensity in the pons due to the selective loss of myelinated transverse pontocerebellar fibres and neurons in the pons. Atrophy of the pons, medulla and cerebellum may also be seen.

There are currently no specific interventions for MSA. Parkinsonism may respond to levodopa, particularly early in the disease course. However, the results are not dramatic and could not be sustained as the disease progressed. Otherwise, treatment of the disease is mainly supportive and with symptomatic control of symptoms. 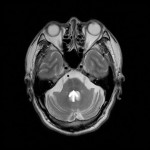 Progressive supra-nuclear palsy (PSP) is also a rare sporadic neurodegenerative disease that is considered a Parkinson-plus syndrome. PSP is a tauopathy, unlike Lewy body disease, Parkinson disease and MSA which are synucleinopathies. Patients usually present in the sixth or seventh decade and the disorder is characterized by vertical supra-nuclear gaze palsy, parkinsonism, pseudobulbar palsy and mild dementia. However, in contrast to Parkinson disease, patients with PSP have symmetric signs, prominent postural instability as well as axial rigidity, such that they often develop into an akinetic rigid state with extended trunk or retrocolic neck posture. They also are much more rapidly progressive than Parkinson disease with only transient response to levodopa therapies. MRI shows mid-brain atrophy with a concave upper surface resulting in the “hummingbird” sign 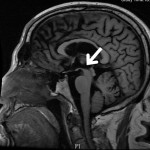