Dementia with Lewy bodies is the second most common neurodegenerative dementia after Alzheimer’s disease, accounting for 15-20% of all cases. This form of dementia is due to an abnormal accumulation of Lewy bodies, which are spherical intra-neuronal protein aggregates consisting primarily of α-synuclein. Dementia with Lewy bodies is therefore considered as a synucleinopathy. Other synucleinopathies include Parkinson disease, Parkinson disease dementia, multisystem atrophy, pure autonomic failure and REM sleep behaviour disorder.

Patients with dementia with Lewy bodies often present with recurrent visual hallucinations and visuospatial disturbances, parkinsonism and fluctuating cognition with variations in attention and alertness.

The nuclear imaging scans shown here are from a 67 year old man who presented with a one year of recurrent visual hallucinations involving seeing people climbing outside the window. Relatives noted fluctuation of consciousness and he occasionally yelled or throwed his arms violently during sleep (the later symptom suggestive of REM sleep behaviour disorder). There were no features of parkinsonism in this patient. Mini-mental state examination was 25/30 with impairment in constructing intersecting pentagons, hence suggestive of a visuospatial impairment. CSF examination including testing for biomarkers of Alzheimer’s disease (Aβ42, tau and phosphorylated tau) were normal. 18FDG-PET showed bilateral parieto-occipital lobe hypometabolism as show in Figure 1A

. 11C-Pittsburgh Compound B PET was normal (Figure 1B). He was diagnosed with Dementia with Lewy bodies and treated with quetiapine and donepezil. 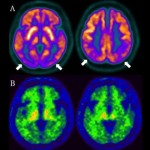