Vascular dementia is the second most common cause of dementia and accounts for approximately 10% of all dementias in developed countries. The incidence of vascular dementia increases with age and are associated with common cardiovascular risk factors (hypertension, diabetes, dyslipidaemia etc.).

Patients often present with a sudden, stepwise, neurological deterioration and there may be other focal neurological deficits. Mood and behavioural changes are more common than memory loss. 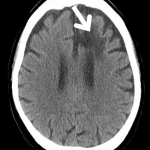 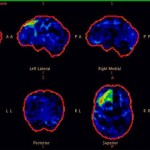 The CT and PET scan shown in Figures 1 and 2 are from an 87 years old woman, who has multiple cardiovascular risk factors. She was referred to the memory clinic because of worsening of memory which was rather sudden in onset. Her relatives were particularly bothered by her change in personality for which she became quite agitated easily and often scolded her relatives. She was also reluctant in taking medications and blamed the medications in causing her insomnia. Physical examination was unremarkable. Plain CT scan of the brain (Figure 1) shows an old ischaemic insult at the left frontal lobe