There are a number of ways of classifying ischaemic stroke. One of them is by anatomical classification e.g. anterior versus posterior circulation, the precise artery involved (e.g. left middle cerebral artery infarction) or the structure affected (e.g. right pontine infarct). It can also be classified according to the underlying etiology. A commonly used classification system is the TOAST classification. TOAST is short for a study which looked into this classification system (Trial of Org 10172 in Acute Stroke Treatment).

This classification divides all ischaemic stroke into the following etiologies:

Patients with strokes due to small vessel occlusion often present with one of the 5 lacunar syndromes:

There should be no evidence of cortical dysfunction (e.g. aphasia, inattention, visual field impairment) and cranial imaging should demonstrate a lesion ≤1.5cm. The most common cause resulting in this type of stroke is chronic hypertension. The CT shown here is from a patient with an old infarct involving the right lentiform nucleus

(Figure 1). The cause of the stroke is most likely due to small vessel occlusion as 1) the patient presented with a pure motor stroke without any cortical signs and 2) the size of the infarct is small being ≤1.5cm (otherwise known as a lacunar infarct). 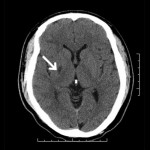