This coronal FLAIR MRI is from an 18 year old man who presented with a 5-year history of temporal lobe epilepsy. He would present with an epigastric aura, describing it as a strange feeling which ascends from the stomach, and there will sometimes be an accompanying sense of fear. The patient would subsequently be noted to have an impaired consciousness with starring, restlessness, oro-alimentary automatisms (in the form of lip smacking and chewing movements) and head will often be deviated to the left. These episodes usually last for 2-3 minutes with no tonic clonic movements. He will then feel exhausted for several hours with accompanying headache, often with accompanying language disturbances (post-ictal aphasia). These seizures would occur in clusters 1-2 times per week and are often more frequent with lack of sleep or stress. A history of febrile seizures during childhood was noted. No focal neurological signs were detected on physical examination. An inter-ictal electro-encephalogram was unrevealing. Cerebral MRI (coronal FLAIR sequence) revealed presence of hippocampal sclerosis

(Figure 1). The left hippocampus appeared atrophic and there was an increase in signal noted when compared to the right side. The normal ‘swiss roll’ structure of the hippocampus is also lost on the left. The patient was treated with carbamazepine with reasonable control of the seizures. 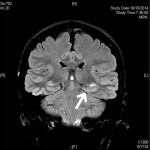