Figure 2) as well as the falx cerebri

There are however, situations where differentiation between calcification and blood product maybe difficult. In such circumstances, delineating the Hounsfield unit (HU) of the particular hyper-density and comparing it to that of bone would be useful. The HU of air is -1000; fat -50; CSF +15; brain +40; blood +100 and bone +1000. If any doubt, a Radiologist should be consulted for advice and interpretation of the CT scan.

It should also be noted that bilateral basal calcifications are also seen in patients with endocrine disorders (e.g. hypo and hyperparathyroidism, hypothyroidism), mitochondrial diseases as well as Fahr disease (a rare autosomal disorder characterised by basal ganglia and extra-ganglionic calcifications, parkinsonism and neuropsychiatric symptoms). These disorders should be considered and screened for if the degree of basal ganglia calcification is disproportionate to that expected for the subject’s age or if the patient’s presentation raises clinical suspicion. 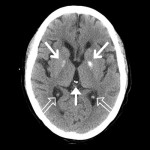 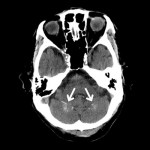 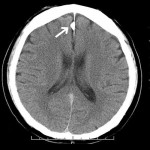