This patient did not have any recent ocular symptoms but was noted to have significant right eye ophthalmoplegia during examination, whilst the left eye movements were completely normal. There was no double vision upon testing. Whilst one would need to consider a combined third, fourth and sixth nerve palsy in a patient with unilateral opthalmoplegia, where possible causes would include a cavernous sinus or orbital apex lesion, this patient did not have features to suggest dysfunction of the other cranial nerves, especially the trigeminal nerve which may be affected in cavernous sinus and orbital apex lesions. Furthermore, the patient did not have any ptosis which would be rather unusual for someone with a possible third nerve palsy. In fact, further detailed examination revealed that the patient had an artificial eye, which was implanted many years ago after a severe accident during work. 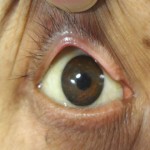