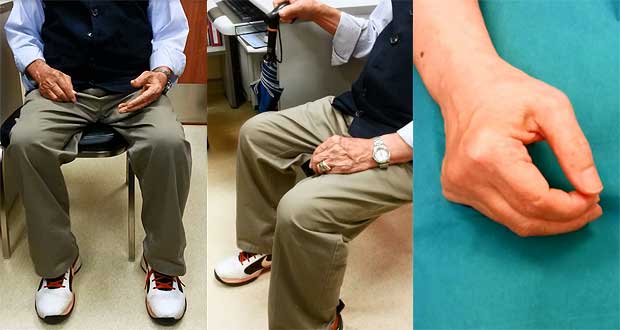 The patients shown in the these three videos all have idiopathic Parkinson’s disease. There is a typical resting tremor that involves the upper and lower limbs in the first patient, and only the upper limbs in the second and third patient. In all three patients, the right side is more severely affected. This is often the case, as Parkinson’s disease usually initiates unilaterally. The tremor shown is of low frequency at around 5 Hertz. In the third video, it seems that the patient is rolling a pill with his thumb. Thus the parkinsonian tremor is often described as “pill-rolling“.

Besides the limbs, the parkinsonian tremor can also involve other body parts such as the jaw. However, tremors involving the head and neck, e.g. the ‘yes-yes’ or ‘no-no’ tremor is not common in Parkinson’s disease. Instead, these are features suggestive of essential tremor.