There are a number of radiological features that can be seen in the non-contrast CT scan which support the clinical suspicion of an ischaemic stroke.

One of the early ischaemic changes that could be recognized on a non-contrast CT film is the “dense middle cerebral artery (MCA) sign“. As you can see in the following three non-contrast CT scans, the left (Figures 1 and 2) and right (Figure 3) MCA

is hyperdense compared to the surrounding brain parenchyma and transverse sinus. This signifies a thrombus within the blood vessel resulting in stasis of blood flow, thus resulting in the artery to appear dense. Patients with significant atherosclerosis and calcification of the arteries (e.g. in patients with end stage renal failure) would also have relatively hyper-dense arteries but often not restricted to a single cerebral artery. The radiological findings should therefore be interpreted in the clinical context, e.g. in a patient presenting with sudden onset global aphasia and right sided weakness 1 hour ago, a dense left MCA sign on a non-contrast CT film without any other cerebral changes on CT would suggest an acute ischaemic stroke due to thrombus within the left MCA resulting in a cortical infarction.

Other sites where the hyperdense vessel sign can be found include the intracranial internal carotid artery, basilar artery, and MCA branches within the sylvian fissure. 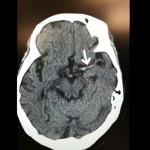 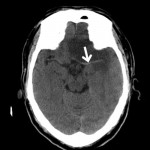 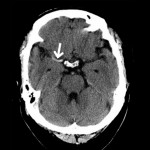