This is a set of cranial MRIs from a patient with osmotic demyelination syndrome, formerly called central pontine myelinolysis. Osmotic demyelination syndrome occurs when wide fluxes in serum sodium levels are induced by too rapid correction of hyponatremia. Oligodendrocytes, which forms the myelin sheaths, are particularly vulnerable to osmotic changes. If the osmotic stress is severe, myelin sheaths can rupture and split. The pons is the most common site being affected. Patients most commonly present with altered mental status and seizures. Other clinical presentations include pseudobulbar palsy, dysarthria and dysphagia. The MRI scan demonstrates a round T1 hypointense (saggital cut) and T2 hyperintense (coronal cut) lesion at the pons, typical of osmotic demyelination syndrome. 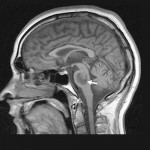 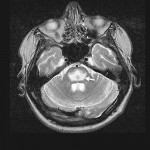