This is a non-contrast cranial CT from a middle-aged man with multiple cardiovascular risk factors who suffered a severe ischaemic stroke involving the left middle cerebral artery territory. There was significant cytotoxic cerebral oedema as a result of the extensive infarction. The patient was operated on by the Neurosurgeons and a left hemi-craniectomy was performed as can be seen in this CT scan. The purpose of the hemi-craniectomy was to relieve the intra-cranial pressure and thus to prevent coning due to the severe mass effect from the ischaemic stroke and cerebral oedema. 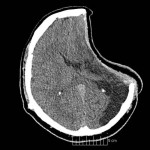