The clinical course of brain abscess ranges from indolent to fulminant. Most clinical manifestations are not due to the systemic signs of infection, but rather to the size and site of the abscess. Headache is the most common presenting symptom. Other symptoms and signs include changes in mental status, focal neurological deficits, fever, seizures, and increase intracranial pressure.

The aetiological agents of brain abscess depend on the underlying predisposition.

Imaging studies (CT and MRI) are the most important investigations in the diagnosis of brain abscess. The characteristic CT appearance of brain abscess is that of a hypodense centre with a peripheral uniform ring enhancement after the injection of contrast. This is surrounded by a variable hypodense area of brain oedema. However, CT may not be able to pick up the early cerebritis phase. MRI is superior and more sensitive than CT and offers significant advantages in the early detection of cerebritis. In T1-weighted images, the abscess capsule often appears as a discrete rim that is isointense to mild hyperintense, together with contrast enhancement with the paramagnetic agent (Figure 1). 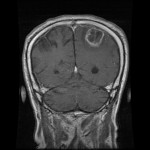 Stereotactic CT-guided aspiration or incision and drainage (I & D) performed in the operating theatre are essential to aid microbiological diagnosis. Gram stain and culture of the abscess fluid can help identify the pathological organism and thus guide anti-microbial therapy.

Antibiotics with coverage of both aerobic and anaerobic bacteria (initially empirical, based on assessment of underlying predisposing factors) and measures for prevention of complications (e.g. use of anti-convulsants in patients with seizures, intravenous mannitol and intravenous steroids in patients with cerebral oedema) should be initiated as soon as possible. Occasionally, serological investigations such as serum cryptococcal antigen and Toxoplasma antibody might be helpful in identifying the causative pathogens.