The clinical manifestations of encephalitis may be similar to those of meningitis. However, altered level of consciousness is a predominant sign. It can range from mild lethargy to deep coma. Moreover, focal or generalized seizures occur in many patients with encephalitis, especially in severe disease. Virtually every possible type of focal neurological disturbances has been reported.

Bacteria, fungi and parasites can also cause encephalitis – but these are far less common as a cause compared with viruses. Examples include Bartonella spp., Borrelia burgdorferi (Lyme disease), Listeria monocytogenes, Mycobacterium tuberculosis, Cryptococcus neoformans, and Toxoplasma gondii.

Examination of the CSF usually shows pleocytosis with predominantly mononuclear cells, mildly elevated protein and normal glucose. Since the commonest aetiological agents are viral in origin, CSF should be sent for viral culture; PCR/RT-PCR for herpesviruses, enteroviruses, and other suspected viruses. In cases of suspected Japanese B encephalitis, serum and CSF should also be sent for Japanese B virus specific IgM antibodies.

Imaging studies (CT or MRI) of the brain is useful as some of the viral encephalitis have specific imaging findings. For example, in Herpes simplex virus encephalitis, temporal lobe is the most commonly affected area (Figure 1) whereas in Japanese encephalitis, the basal ganglia and thalami (especially bilaterally) are more frequently involved (Figure 2). In addition, electroencephalograms (EEG) may also reveal features suggestive of viral encephalitis, e.g. periodic lateralising epileptiform discharges. 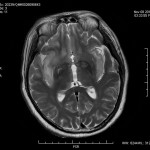 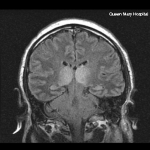 Patients with encephalitis can deteriorate rapidly and so they should be closely monitored. Complications such as increased intra-cranial pressure, seizures, and autonomic dysfunction can occur.

Viral encephalitis, the most common cause, has limited antiviral drugs with proven efficacy. Acyclovir and related compounds are the most effective antiviral agents for herpes virus infection (HSV and VZV). Supportive measures are the mainstay of treatment for most encephalitis cases.