Creutzfeld-Jakob Disease (CJD) are prion diseases and can be subdivided into sporadic (account for 85% of cases), genetic (15% of cases) and acquired forms (<1% cases). CJD is rare with an incidence of 1-1.5 per million population per year with a peak age of onset of 55-75years. It is a common cause of rapidly progressive dementia. However, other symptoms including myoclonus, visual or cerebellar disturbances, pyramidal and extrapyramidal signs are also common and these occur depending on where the abnormal prion proteins accumulate in the brain. Investigations such as electroencephalogram (showing the classical 1 cycle per second spike and wave discharge), presence of 14-3-3 protein, neuron-specific enolase and total tau in the CSF only have moderate sensitivities in patients with CJD. In contrast, the presence of abnormal hyperintensity in the cortical gyri (“cortical ribboning”) is shown to be present in 98% of CJD patients and can be seen in the set of MRI images (diffusion weighted imaging sequence) shown here (Figures 1 to 4, especially prominent in the right temporal, parietal and occipital lobe cortices in this case). The management of patients with CJD is mainly supportive. The prognosis is extremely poor, and patients often deteriorate into an “akinetic-mutism” state at the end stage of the disease. The mean survival from onset of neurological symptoms is approximately 4 months. 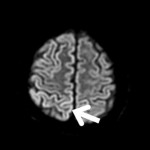 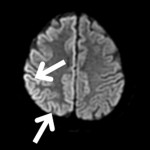 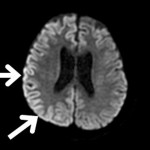 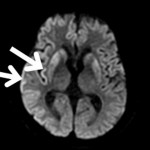