Viral encephalitis is a serious neurological disorder associated with relatively poor outcome. Herpes simplex virus (HSV) encephalitis is the most common causative agent for viral encephalitis. More than 95% of HSV encephalitis is caused by HSV type 1. HSV 1 is transmitted primarily via saliva which subsequently enters the oral mucosa and spreads to the ganglia nearby (trigeminal, superior and inferior cervical ganglia most common). Initially the virus is latent in the trigeminal ganglion. However, reactivation of the virus could occur spontaneously or could be triggered by trauma, stress, immunosuppression, or hormonal fluctuations.

Upon reactivation, there would be intracranial spread of the virus along the small meningeal braches of the trigeminal nerve, affecting the temporal lobe and orbital surface of the frontal lobe, which are the most common regions affected. The series of MRI scans here are taken from a middle-aged patient who presented with a few day history of fever and confusion (Figures 1 to 6). Lumbar puncture showed a lymphocytic predominant pleocytosis with normal CSF protein and glucose levels. Polymerase chain reaction for HSV-1 was positive. A cranial MRI subsequently demonstrated hyperintensities over bilateral temporal lobes

(right more than left) in the T2W scan (axial cuts, Figures 1 and 2) as well as the FLAIR sequences (coronal cuts, Figures 5 and 6). There was also evidence of restricted diffusion over both temporal lobes

(Figures 3 and 4). The patient was promptly started on intravenous acyclovir after suspicion of a central nervous system infection and continued for a total of fourteen days after confirmation by viral PCR. 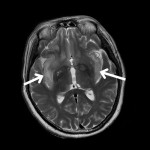 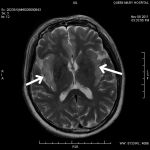 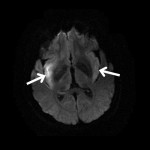 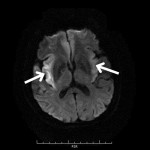 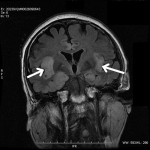 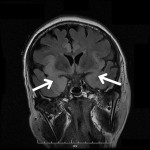